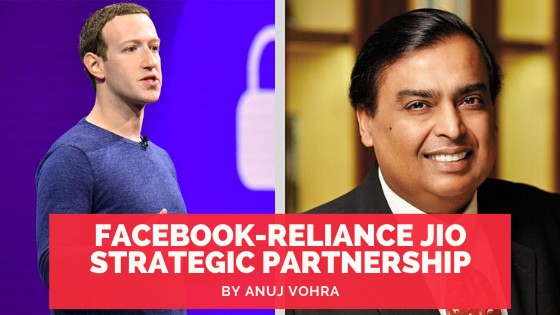 According to recent business and technology articles, Reliance Industry is planning to take big actions in order to make their next big move. Here is Facebook-Reliance Jio Strategic Partnership for Super-App.

Earlier I wrote an article How Reliance is planning to destroy Flipkart and Amazon. However, there were not more updates.

No one knew how Reliance will make big impact of online shopping but now it seems very clear.

One of the biggest projects of Reliance Industries is Super-App. By doing this, Reliance is trying to do the same thing that WeChat did in China.

Before doing into the depth, let us first understand WeChat.

WeChat is a Chinese application that basically helps people to communicate just like WhatsApp. In addition, it includes so many other services like eCommerce and online money transfer.

What is Reliance Jio?

Reliance Jio is a telecom giant having more than 350 million subscribers.

What is Reliance Jio’s SuperApp?

The SuperApp of Reliance Jio is currently just a prediction that it will do provide multiple feature like hotel booking, flight booking, ecommerce, multi media chat, news, online money transfer and so on.

When WeChat was launched, it was a communication app just like WhatsApp. I should say a Chinese WhatsApp because WhatsApp is banned in China.

WeChat is owned by Tencent Holdings Limited that is a multi billion dollar company.

Currently, WeChat is not just a communication application like WhatsApp. It is more than that.

Experts are saying that WeChat is all in one app in China. Let us look at the services that WeChat offers…

In one app, WeChat users in China get all these services and hence people call it all in one app.

Now, just imagine, what if you get all these services in one app!!!

This will become true because India’s Richest man and the chairman of Reliance Industries is planning to make an app like WeChat.

According to the recent news, Facebook is going to acquire 10% stake in Reliance Jio.

Business experts are considering this would be a billion-dollar deal with the social media giant and telecom giant.

It is still not clear how this deal will make a shape in the future but people familiar with the matter are saying that there are two possibilities.

Facebook may build an app for Reliance that is Super-App in which people can chat, share images, videos and files, book flight and hotel tickets, book cabs, order food, transfer money, order anything from Reliance market and so on.

Another thing is Reliance may built integrated platform with WhatsApp.

India is the biggest market of WhatsApp with more than 400 million active users. If Reliance plans to integrate its service with WhatsApp, that would be the smartest move. Because this integration will help Reliance to get millions of users without spending more on marketing and building a separate app.

If this thing happens, we will see exponential growth of Reliance Industry.

In January 2019, I wrote an article on How Reliance can Beat Amazon & Flipkart by launching its own e-commerce store. Today, it is much clear that Reliance has planned for not just an e-commerce. There would be a lot more than e-commerce.

Consequently, Reliance Jio has been planning to make an application like WeChat.

Also read: How does Reliance Jio Get Marvelous Success

Reliance has been planning to go to become a debt-free company. However, the company is already in debt of billions of dollars.

Partnering and selling a stake to the biggest tech companies in the world can make Reliance Industry a debt-free company.

Reliance Jio has partnered with Microsoft to offer cloud computing services to businesses.

After such deals from the world’s biggest companies, Reliance Jio can easily expand their business in other developed countries and grow faster.

We will see big deals from Facebook and Google soon.

Why Crypto-currency is Banned in India