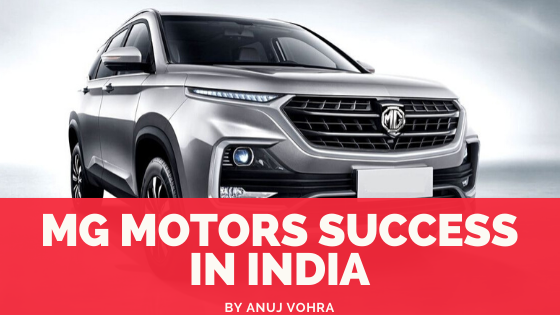 India’s automobile sector has been going down and even in countries like China and the USA, automobile companies are shutting their factories for a temporary basis because of less demand in the market. On the other side, Morris Garage India and Kia Motors India have been growing super fast. Here is how MG Motors and Kia Motors succeeded in India.

Automobile sector that holds the largest number of employees is going through really tough time.

Not only in India, but the decreasing demand in the automotive industry is also being seen all over the world. From 2018, China and the United State have been seeing massive downfall. And soon, the same trend is observed in India.

Millions of people have lost their job.

Despite all these things, in India, the Chinese automobile giant Morris Garage and the sister company of the South Korean automobile leader Hyundai Motor Company, Kia Motors made their grand debut in the struggling and surviving industry.

MG Motors may be a non-popular name for us before 2018. However, the parent company SAIC Motor Corporation Limited is the largest auto company in China and the sixth-largest automotive company in the world.

In this article, we will discuss MG Motors mainly because both the companies have the same target audience and the same business and marketing strategy.

Without having a strong brand reputation in the market, the companies cannot survive in a highly competitive automobile market. MG motors focused too much on branding and here is how.

The origin of MG Motor is from Britain. Basically, we can call it a British company and be acquired by SAIC Motor company.

British ruled the world and that presents legacy. When you see an ad of MG Motor, you can feel that MG Motor is established and a premium car manufacturing company.

In addition, the brand ambassador of MG Motors India is Benedict Cumberbatch who is famous for popular among youngsters because of Doctor Strange (a hit movie by Marvel Studios).

Watch these ads and you can feel the premium MG Motors brand.

These two giants sell cars which are not that much premium. That means the price of the cars lies between 3,00,000 INR to 8,00,000 INR. This is the range where Maruti Suzuki and Hyundai generate their more than 70% of revenue.

Therefore, MG Motor and Kia Motor have no competition with these rival companies.

In addition, both the companies did not want to compete with Audi, Mercedes and BMW.

They focused only on SUV (Sport Utility Vehicle) cars as there was a less penetration in 2019.

Yes! I wrote the word affordable!

Compare to other big car manufacturers, MG Motor sells the car in the rage between 12,00,000 INR to 20,00,000 INR. The value company provides is outstanding.

MG Motors can be operated with a mobile phone. At the time when I am writing this article, there are 100+ voice commands to access the functionalities of cars.

Well, India is a young country. There are millions of young people who earn millions.

It is being observed that young people generally don’t prefer stereotypical things to buy. For instance, the cars of Maruti Suzuki and Hyundai. MG is completely different from normal cars in India.

Do you know the reason?

All the decision related to business was taken from headquarters that is located in the United States of America. Consequently, top management of a company did not know what is the ground reality in the Indian market.

MG and Kia Motors on the other side have a separate business and management team in India. So they understood the mindset of Indian buyers and according to that they made a grand debut.

You may think that these two companies will become threat for Maruti Suzuki.

MG and Kia are not in the competition to beat Maruti Suzuki because Maruti has a different type of target audience. These two target premium and rich class people and Maruti targets middle and upper middle class.

Certainly, MG and Kia will definitely make an impact in this sector but it will take 5-10 years for sure.