Politics Behind Stepping Down of Google Cofounders 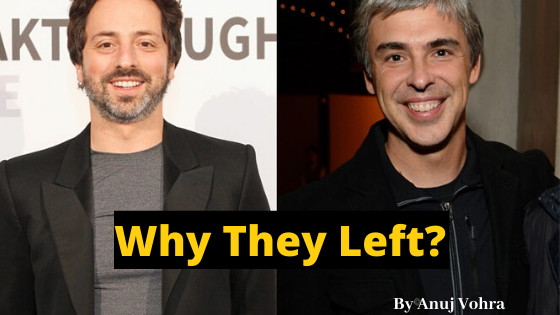 From 2017, Google and Facebook both have been facing a lot of issues of data protection in the developed countries where their governments are more serious about the data of their citizen.

Alphabet is a parent company of Google. Hence, Alphabet is also responsible for whatever happens related to data protection and misleading ads.

Both the co-founders handed Google to Sundar Pichai (also current Cheif Executive Officer) in 2015 and changed the structure of the company and made a parent company Alphabet Inc.

1. Not a Challenging Task:

According to Stuff, they handed over to Sundar Pichai because being the chief executive of Google was really a boring job for them. Google does a lot of things in business but their main business is search engine and there is no player near to Google. So, there was no challenging task for them.

Even after stepping down and leaving the company, both the cofounders have not sold their stake from the company.

Billioniners holds more than 20 million shares of Alphabet that makes their network more than $55 billion each.

From 2015 to present date, Sundar Pichai managed Google efficiently. This thing made both the cofounder to make Sundar Pichai, the CEO of Alphabet.

4. Antitrust in the European Union:

European Union has found that the search engine giant uses the information of users illegally.

Sundar Pichai had not been handled with the issue effectively and that’s why parent company has to take responsibility. That was managed by Larry Page and Sergey Brin.

Both the co-founders have spent more than 20 years for building one of the greatest companies in the world.

At the age of 46, they have achieved a lot in their life. And it was the right time to give responsibility to a good leader Sundar Pichai.

Spending quality time with family is one of the most essential things. Being the CEO and president of Alphabet has a bunch of responsibilities.

Hit the bell icon below on the right side of the screen to never miss any update. Subscribe to get updates.

4 thoughts on “Politics Behind Stepping Down of Google Cofounders”