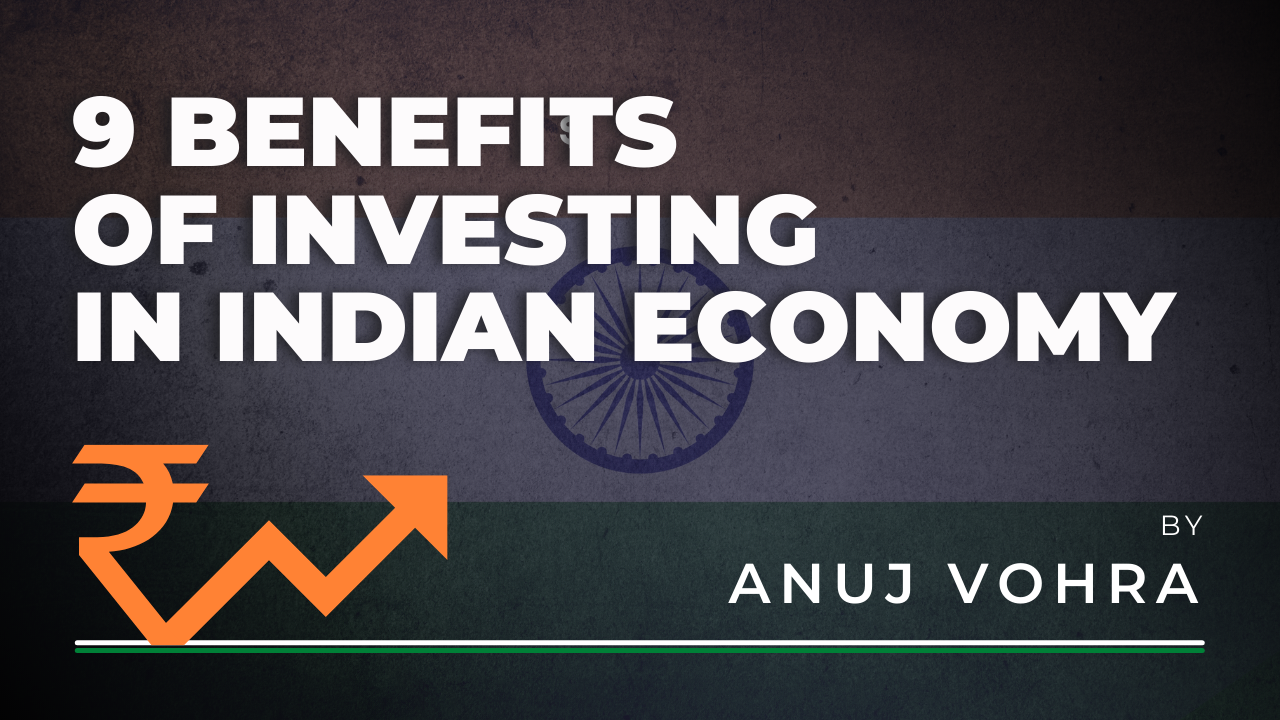 India is home to more than 1.3 billion people and after China, it is the second-largest country based on population. And if you are reading this article in 2028 or 2030, India may have surpassed China in terms of population. It’s a developing country having massive growth potential. In this article, we will discuss the benefits of investing in the Indian economy.

By the time I am writing this article in 2021, India’s GDP is about $2.7 trillion – the 6th largest economy, according to LiveMint. If we talk about the country’s total market capitalization, it is more than $3 trillion – the 7th largest in the world. Both GDP and total market capitalization keep growing because of the one major driving factor – the young population.

It is a country having more than 700 million people under the age of 35. You may think that how can we say that the young population can drive a massive amount of growth in the country?

It is an obvious question. Keep reading you will get all your answers.

Let’s jump into the benefits of investing in the Indian economy.

9 Benefits of Investing in Indian Economy

India went through five major wars after getting independence. Many geopolitical games were played and are played to stop India’s growth. However, from getting independence as a poor Asian country to one of the fastest-growing economies in the world, India has emerged a lot.

The next 3 points will make you realize that why having a young population is the best thing for any economy.

So, if we talk about consumption, the young population drives consumption.

Youngsters have their own desires, goals, aspirations, passion, enthusiasm, and hobbies. They try to fulfill their dreams by working hard, making money, and therefore, they have a higher tendency to spend money. High consumption means, high demand in the market and it directly means tremendous economic growth.

I remember the day when I used to talk about entrepreneurship, business, and all such things in 2016, people used to ignore. Now, the scenario is completely different. Starting a business is a cool thing now!

India’s risk-takers prefer to start their venture considering an opportunity to deliver their products and services to 1.3 billion people. Global investors have already figured out the immense potential of the country’s economy and hence, as a result, the country has more than 53 startups having a valuation of $1 billion.

Thanks to the Reliance Jio revolution, the price of internet data went down by 90%. It allows people to leverage the internet and all online services.

There are more than 600 million internet users in India and it is expected to reach 900 million. As more people use the internet, more people spend money using online payments facilities.

Connecting this topic with the younger population, the young people of India comfortably use the internet and spend money.

Also read: How the Gig Economy is Changing India?

Because of the lack of awareness, 97% percent of Indians never invest in financial markets. Now, people have begun to invest. Each month millions of people start their investment journey. The rise in video consumption is also responsible for such massive growth.

However, it is still only 3% of the population prefers to invest in the stock market. In the United States of America, 51% of adults prefer to invest. Therefore, in the next 2-3 decades, we can easily expect outstanding growth in the Indian stock market driven by retail investors.

When you hear the term ‘manufacturing’, the first country that comes to your mind, without a doubt, is China. But, India will become the next manufacturing hub.

According to the report from Global Manufacturing Index, India overtakes the USA and is just behind China in terms of the most attractive manufacturing destination. This shows that the giant companies of developed countries prefer India more than the United States.

The Government of India has been extensively spending money on improving the infrastructure of the country as it is the most important thing for the transportation of goods.

Reliance Industries, Tata, and HDFC group of companies have been investing aggressively in India. Samsung has set up a display manufacturing plant. Amazon invested 11,400 crore INR (more than $1.7 billion) in 2019-20 in India. And many companies show their interest and invest actively to expand their presence in India.

Finding quality manpower is a hard task in many countries. However, by giving proper training, Indian workers easily work. So, foreign companies don’t have to face headaches while finding the best manpower.

If you are an Indian and reading this, don’t wait, start investing. Start your business in India. Start investing in Indian equity markets.

If you do not belong to India, you can invest in India-specific mutual funds and take advantage of massive growth potential.