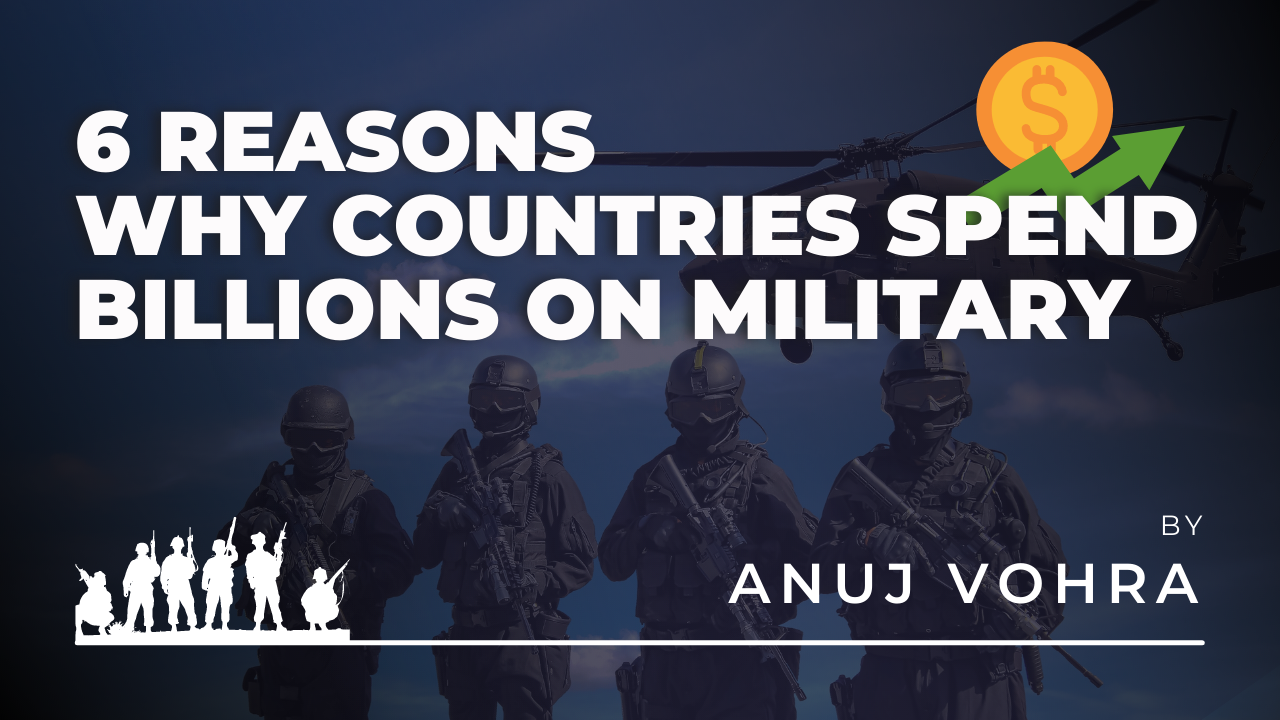 According to Statista, the United States of America spent $778 billion, China $252 billion, India $72.9 billion, and Russia $61.7 billion in 2020. Huge amount! In this article, we will discuss the reasons why countries spend billions on military.

India ranks at number 3 for spending on national security. An obvious question you would have in your mind is that India is a developing country. The wealthy European countries like the United Kingdom, France, Germany, and Italy spend far less amount compare to India. Then, why does India spend such a huge amount on the military? Keep reading. We will talk about it in-depth.

China spends 1.9%, the USA 3.4%, India 2.4%, and Russia 3.9% of their GDP for national security according to the report from the World Bank. The same report shows that the best-advanced military-powered country – Israel, spends 5.3% of its GDP on military expenditure. Among the major economies, these are the highest percentage.

Now, let’s understand the reasons behind billions of dollars of military expenditure.

China is looking to become the next superpower and the country has also started giving tough competition to the United States. China has been innovating and investing huge amounts in improving its defense power so much so that the country can even beat the United States of America in some of the areas.

If we talk about other threats for America, there are many! North Korea and Russia are also enemies of the United States. Moreover, there is always a risk of a terrorist attack. Therefore, to cope up with all these problems, the US has to spend more money on national security so that the US military remains powerful.

India is having border issues with both nuclear-powered countries, Pakistan and China. Therefore, it is mandatory for India to keep spending money on defense and ensure national security. Also, there is a big threat of terrorism.

If India stops spending money on national security, China and Pakistan both would be waiting to attack the Indian territories and capture the land.

The number of employed people would reach tens of millions if we include people working indirectly with the security of the country.

Growth becomes harder if the country has to face a war in two-three years. For economic stability, peace between countries is important. Having a powerful military means there are fewer chances of invasion by any country.

If there is no economic stability, there would be fewer employment opportunities. There are chances of hyper-inflation too.

Businesses would think twice before starting new ventures because of the unstable geopolitical environment. That is the reason, if the country’s military strength is powerful, the businesses would prefer to spend money on business expansion without worrying.

I have a question for you.

Would you prefer to invest in a country where the country can collapse due to poor military power if another country attacks?

Obviously. A big NO!

Foreign investors would not feel comfortable if the country has a corrupted or poor military power. Not only that, but domestic investors would also avoid investing in their own country. Because of that, the economic growth slows down. Fewer job opportunities mean a higher unemployment rate. There would be less demand for the goods and services in the country.

Canada, South Korea, Japan, 28 European countries, Australia, New Zealand, and many other countries are allies of the United States of America. That means, the US military helps to protect these countries partially or fully. This is the primary reason the countries like France and Germany have less expenditure on defense compare to India.

However, India is a self-reliant country. The country has powerful military armed forces and that’s why India is not dependent on the USA or any developed country. India counters when Pakistan and China try to invade the border.

Consider watching this video for 5 minutes.

These are the six reasons why countries spend billions of dollars on national security. It becomes essential to ensure safety across the country.

I would love to know your views as well. Tell me about other reasons.

If you are living peacefully in your country, be grateful.