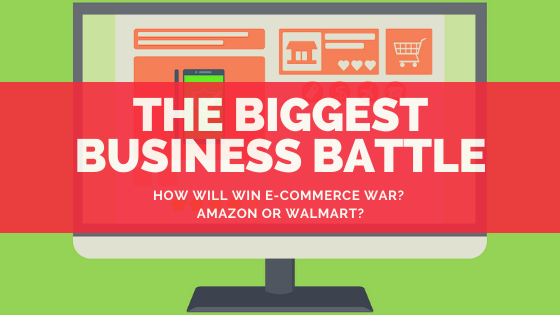 It may sound weird to you that both the companies have been trying to compete with each other because Amazon is in the ecommerce business and Walmart is in the retail business. However, things have started changing now! Here is Amazon and Walmart business war.

After reading this article, you will get to know how superbly Amazon has been growing and investing in innovation and at the same time, maintaining profitability.

Amazon has been growing amazingly since 2010. There are several seasons of outstanding growth such as profitability in e-commerce, cloud computing, Amazon prime videos, advertisements and so on.

According to the article by Qz.com, Amazon took 14 years to become a profitable company. You may be thinking about why the company took so many years.

The first thing that may come in your mind is that the e-commerce giant spent so much in marketing. That’s just half true. Amazon used to spend almost everything the company earns in marketing, innovation, expansion and the most important is acquiring new businesses.

The majority of the revenue of Amazon comes from e-commerce, third-party seller, web services and subscription of prime services.

In addition, you may get surprised if you come to know the names of clients of Amazon Web Services. NASA, Adobe, Netflix, Shopify and General Electric are the biggest clients!

When it comes to e-commerce business, the company has started testing drone delivery in the United States of America. Further, Amazon has also started opening its own retail stores!

Till now, we discussed the massive growth and outstanding business strategies of Amazon. Let us discuss how these things have been affecting the most to the world’s biggest retail giant Walmart.

As we can see from the data, both companies are the biggest in the world in their category.

According to the official website of Walmart, the company operates more than 11,500 stores across the world, employing 2.2 million people. On the other hand, Amazon has only 650,000 employees.

Basically, Amazon is a technology-based company and Walmart is a retail company. That is why Walmart has more employees. And the more number of employees means more expense. And the more expense means less spending on marketing, innovation, expansion and acquisition.

When it comes to physical stores, Walmart, of course, beats Amazon but when it comes to e-commerce revenue, Amazon beats Walmart with a huge margin. However, as we can see from the data, compared to 2018, Walmart was able to almost double revenue in 2019.

The biggest advantage for Amazon is e-commerce. Hence, the company is generating revenue from 200 countries. Whereas Walmart is heavily reliant on physical stores and that is why the company is operating in only 28 countries.

From the table, we can assume that Walmart may face loss in the upcoming years.

The Biggest Threats for Walmart:

Amazon is not just an e-commerce company. It generates revenue from so many sources and that is why the company can afford to burn its money on marketing and innovation.

140 million Americans visit Walmart stores every week. But, it is being observed that people have started to prefer to shop more online. This thing can impact slowly but Walmart has to be careful.

Another thing, Amazon has started testing drone delivery that delivers orders within 30 minutes.

People would definitely prefer Amazon over Walmart if they get deliveries within 30 minutes.

The Biggest Threats for Amazon:

Walmart has already entered in e-commerce business mainly by acquiring more than 70% stake in Flipkart. People can now have access to purchase from Walmart website also. As we discussed earlier, the revenue of Walmart has started increasing since the acquisition of Flipkart.

According to the article by CNN, Walmart has done partnership with Google to create a voice-enabled grocery shopping. That means we can just buy things from Walmart using voice command.

It looks like Walmart to trying to protect their business and on the other hand, Amazon wants to enter in each and every business industry. If Walmart will not take quick action, it would be difficult for the company because people prefer online shopping over visiting retail stores.

Watch this video to know more about this battle.