How did Satya Nadella Save Microsoft? 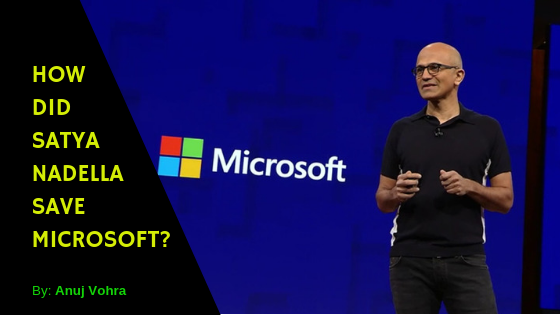 After the resignation of Bill Gates as a CEO of Microsoft Corporation, the growth became slower and slower. Here is How Satya Nadella saved Microsoft.

We all know Bill Gates is co-founder of Microsoft and he is one of the richest man in the world.

Today, we need to understand that after his resignation from Microsoft as a CEO, the company struggled a lot.

It was the time when Steve Ballmer became the CEO of a company.

Steve Ballmer was 30th employee of Microsoft. He knew the foundation of the company.

That’s why board of directors nominated Steve Ballmer as a CEO of the company.

Also read: 7 Major Reasons Why Apple is Failing in India

But in 2003, Steve Ballmer was the CEO at the time. He sold all the Apple shares which worth billions of dollars now! It is estimated that the value of $150 million would be more than $50 billion.

It was the time when iOS and Android were growing super fast.

Apple made an integrated operating system and launched an iPhone. After the launch of the first iPhone, the smartphone industry started booming.

In no time, Google came up with their open source Android operating system.

Because of having an open-source OS, all the big companies like Samsung, HTC and Sony started using Android as an operating system.

Microsoft launched their first windows phone in October 2010. This time, Microsoft was not the first mover.

Apple and Google had already started capturing the market rapidly.

To compete with Google and Apple, Microsoft bought Nokia. And this was a huge mistake!

Bill Gates nominated Satya to become the CEO of a company.

He made so many changes in the company that not only saved Microsoft but also make one of the most valuable companies in the world.

Microsoft had to do it. Nokia was making the loss of millions of dollars.

That’s why Microsoft sold the 500 design patents to HMD Global.

It was the toughest move!

LinkedIn is a social networking for professional people.

It has over 500 million members.

LinkedIn had also bought Lynda which is online educational platform for $1.5 billion.

After Amazon Web Services(AWS), Microsoft is the biggest cloud computing service provider in the world.

Microsoft Azure is making billions of dollars in profits and cloud computing has a huge potential.

Businesses have been shifting from offline to online. This is the biggest sign that Microsoft Azure has a massive potential to grow.

I wrote this article a year ago in 2019 and I am editing this article in 2020. It is the time when most businesses in the world are shut down due to COVID-19 pandemic.

When there is an economic crisis or financial crisis, cash-reserve is very important for businesses. If the company has a sufficient amount of cash, it can easily survive, no matter how big the economic crisis is.

You may be surprised, Microsoft has huge amount in cash. $136.6 billion.

$136.6 billion is greater than India’s biggest company that is Reliance Industry LTD.

That’s why we can clearly see how Satya Nadella changed the business model from product base to service base.