How does Reliance Jio Get Marvelous Success? 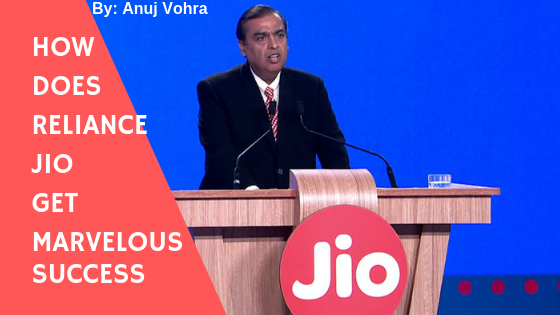 Internet was not everyone’s cup of tea nearly 5-6 years ago. Because it was very expensive. Today, we all use the internet on our smartphones and also have good data to use. Let us go into the depth of Reliance Jio success story.

I wrote this article in December 2018 and editing right now on 17th April 2020, because the whole country is in lockdown right now. It has been more than 23 days and without the internet, it would be difficult for us to survive this lockdown.

Hence, this article will help you to understand how Reliance Jio has disrupted the whole telecom industry. Enjoy reading…

India may not have the highest internet users in the world yet. But, the country will definitely reach number 1 rank by 2028 and even before 2028 because the growth is exponential.

As a great business person, he knew that after 30 to 40 years, petroleum is not a good source to sustain the business. Also, his two sons Akash Ambani and Anant Ambani were ready to take the business.

Reliance Jio Infocomm Limited was registered in 2010. The company spent nearly 4 years to spread network in the country.

Other big companies like Airtel, Vodafone and Idea knew that Reliance Industries was planning to enter the telecom sector. But, all these companies ignored this fact.

Today, we can see Vodafone and Idea both are merger company. Both the companies are in a big loss. Voda Idea limited is making losses of thousands of crores and losing millions of consumers.

Airtel is the only company which is fighting against the data war with Reliance Jio.

Reliance Industries has used a unique business strategy that is already done by many big companies such as Google.

This strategy is called as ‘Give, Give, Give and ASK’.

I came to know about this strategy when I read the book “Jab, Jab, Jab, Right Hook” by Gary Vaynerchuk in 2017.

Reliance Jio was launched by providing free internet 4 Gb/day. After 3 to 4 months the company reduced the data to 3 Gb. Soon after, it was 2 Gb/day. And after 1.5 years of testing purpose, the company provided 1 Gb/day.

Besides, they were providing free internet and India is a price-sensitive market. That’s why they able to create a very large consumer base before officially launching the company Reliance Jio Pvt. Ltd.

The company gave free internet to the country. Now, it was time for the company to start making revenue. The company started with 300 rs for 84 days. And 1 Gb data per day.

Telecom giant Reliance Jio infocomm ltd. was providing free voice calling to any local number. This was also the biggest move to capture the large market.

It was still better deal rather than any other telecommunication company in India.

Also read: How Patanjali Became the market Leader in FMCG?

Still, you can see the growth of Reliance Industries. It is only because of Jio. They also started providing Jio mags, Jio music, Jio cinema, Jio TV and many more.

That’s why people prefer to use Reliance Jio sim-card as secondary card.

That’s how ‘Give, Give, Give and ASK’ strategy worked for Reliance Jio.

According to the economic times, Mukesh Ambani had invested nearly 150,000 crores before the starting of the company.

It looks like there will only two telecom companies in India: Reliance Jio and Airtel.

The demand is the internet will continue to rise as millions of people from rural areas have been shifting from using the feature phones to smartphones.

In the next 10 years, we will see how Reliance will dominate the whole internet market.

2 thoughts on “How does Reliance Jio Get Marvelous Success?”