Why Indian Smartphone Companies went Out of the Business 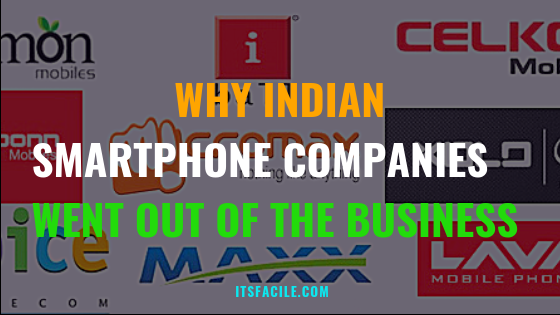 We all have heard the name of Micromax, Lava, Xolo, Karbonn, Spice and Intex. But, none of these companies is able to sustain in today’s smartphone market. Here is why Indian smartphone companies went out of the business.

All these companies were performing well before 2014. At least, they were not making a loss.

Just before three-four years from now, Micromax had beaten Samsung India to become a number 1 smartphone company in India. This was the time between 2013-2015.

Micromax and Karbonn were leading companies at that time. You may know many cricket series by these companies.

In India, Xiaomi, Oppo and Vivo were just in the initial stage. The major companies who had captured the market were Samsung, Micromax and Apple.

BBK electronics is a parent company of Oppo, RealMe, Vivo and OnePlus. These four brands holds large portion of smartphone industry in India.

Today, let’s understand what happened to the Indian Smartphone companies.

Indian smartphone companies didn’t innovate anything which is comparable with Chinese companies.

Micromax, Lava and Karbonn had enough money at that time to invest on manufactring plants, research and development.

They could have start their own software companies which develops the inbuilt innovative features.

But, these companies did nothing.

2. Focusing on PROFITS only:

Indian companies just wanted to make money as quick as possible. But, this idea failed completely.

Xiaomi is still making less profit because they want consumers to love their product.

All the Chinese brands are operating their business on only 5% profit margin.

On the other side, Indian companies wanted to make more money by taking large profit margin. Also, the quality of Indian brands were so poor compared to Chinese brands.

We cannot blame the initiative taken by the government. Because of make in India, Chinese companies started creating assembling plant in India.

That decreases tax and transportation cost of Chinese companies.

The harsh reality of Indian smartphone brand is they didn’t have any kind of manufacturing plant.

All the companies were buying phones from Chinese manufacturers. And then by giving the branding to the phones, they were selling phones in India.

All Indian smartphone brands were expecting the arrival of 4G in India by 2018.

But, Reliance Jio rapidly spread 4G connectivity in the country.

Hence, Indian companies were not ready for 4G. Before taking any big decision, Xiaomi, Oppo, Vivo and OnePlus had already started capturing the market.

Subscribe us on WhatsApp and get updates on your smartphone.